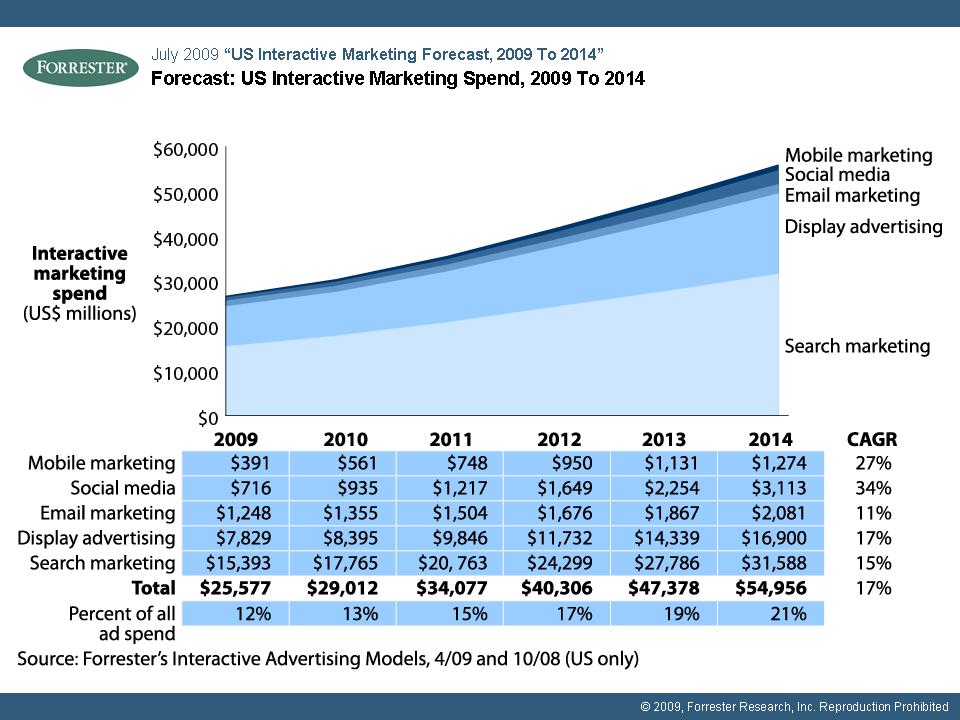 A new study from Forrester Research is predicting a shrinking ad market over the next five years, with a very positive prediction for online advertising: they expect the U.S. interactive ad market to reach $55 billion during that timeframe, meaning marketers will go from spending 12 percent of their total ad budgets online in 2009, to 21 percent by 2014!

The biggest percentage of spend overall will be in search with $31.5 billion and in display with $16.9 billion in spending, respectively. But most of the growth will come from social media and mobile advertising.

Advertisers are expected to spend just $716 million in 2009 on social media marketing – including ads on social networks, but not including resources devoted to their social media activities as blogs, twitter, etc. The segment is expected to grow by 34 percent to top $3.1 billion in 2014. This actually backs a recent Forbes survey, which found that senior level marketing execs plan to spend more on social media campaigns over the next six months. According the actual Forrester Research study mobile ad spending will grow from $391 million in 2009, to $1.2 billion in five years (growth by 27%).

On the other hand eMarketer predicts that U.S. ad spending on social networks will drop 3% to $1.1 billion this year. This is basically reverting an earlier projection in December 2008 with a growth of 10.2% for 2009 to $1.3 billion.

What do you think or experience right now: growth or decrease?

The Importance of Innovation as Part of Modern Marketing